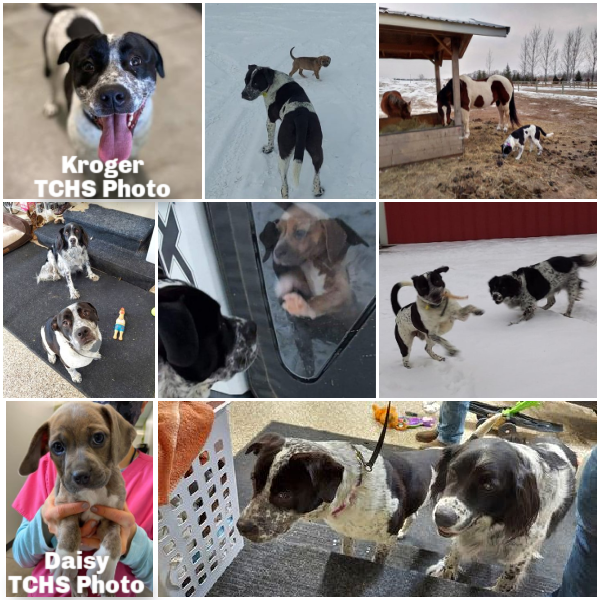 This story is a two-fer: Over the course of a few weeks a family adopted an adult dog and a puppy from TCHS, both of whom are loving rural life and each other. First, a 2-year-old Border Collie mix named Kroger arrived at TCHS in mid-January. Kroger was a transfer from a Tennessee rescue, so we didn’t know too much about him. He was adopted after a few weeks and his family reports he is adapting to the northern Minnesota territory quite well.

“He has a lot of energy but is very smart and learns quickly. He is enjoying his life on our little farm along with his heated garage with doggy bed and toys, etc. He has met the horses, ponies, donkeys and goat here and has gone well. (He and the goat just have an understanding that they will probably never like each other, haha.) He has a 12-year-old Springer mix for a buddy but only gets limited time with him since he's old, arthritic and easy to tip over.”

Now both Kroger and his senior citizen canine buddy have a little sister, a Boxer/Mastiff mix puppy. Her name is Daisy, and she loves her big brothers!

“She doesn't have much fear of anything and she is relentless playing with them. Her big brothers are VERY patient with her. When we had a family member bring their dog over last weekend, Kroger would stand over her, protecting her I assume.”

It’s nice to have an older sibling looking out for you!  Thank you for helping us look out for the animals until we can find great homes like this for them!