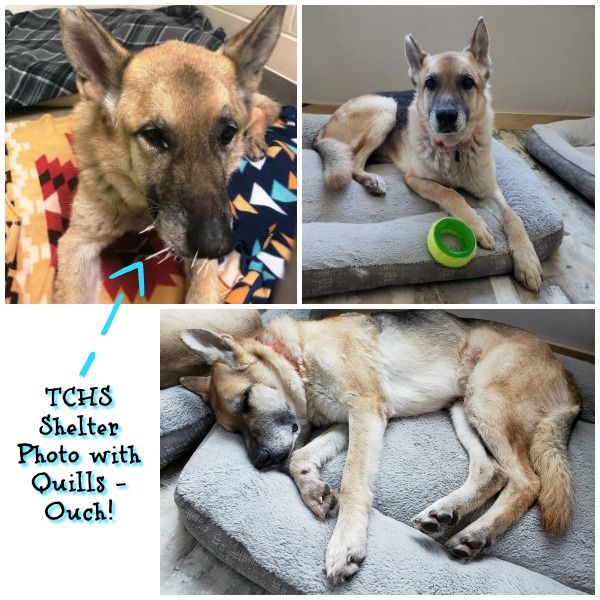 This is a tale of a dog whose fortunes changed dramatically in a short amount of time. Sebastian, a 12-year-old German shepherd mix, was discovered in a rural area by a Good Samaritan. The stray dog was very thin – and he had lost a battle with a porcupine. His face was full of quills, and he even had quills in his tongue. The person brought Sebastian into TCHS on Dec. 26, where staff quickly got the dog medical attention. He was in pain, but was still gentle and sweet with staff. Despite the quills in his tongue, Sebastian gulped down food – he was obviously very hungry. The TCHS staff administered pain medication, and eventually the quills were removed.

Sebastian’s luck didn’t stop there: A family quickly took him in after TCHS cared for him. Here’s an update from them:

“Three weeks ago when we got him he was skinny, timid, on medication, had diarrhea and was very slow. Since then we have seen a daily improvement! Sebastian has such a personality and even has a hop in his step while playing. He has gained 10 pounds and looks so healthy. His coat has gotten softer, and he moves with grace. Sebastian loves going for car rides and enjoys being sprawled out in the backseat. He is such a joy! … He has come such a long way from having quills in his face and ribs showing on his skinny little body.”