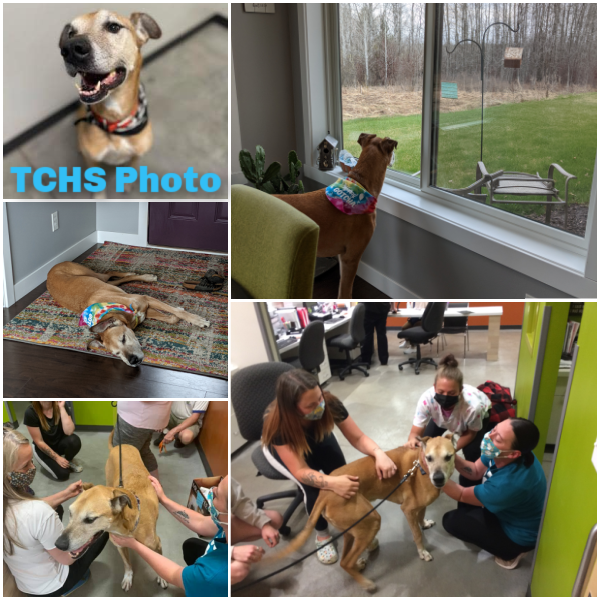 This story is about a very special dog who captured the hearts of many of us at TCHS – so much so, that when he recently came back to pay a visit, the staff went wild! Cano is a 10-year-old Great Dane mix who arrived in mid-March. Now, staff and volunteers don’t often play favorites … but Cano was definitely a standout! (One staff member even brought in her Polaroid camera to do a mini photo shoot with him.) But while an animal’s age hasn’t traditionally been a barrier to adoption, Cano stayed at the shelter for what seemed like a while considering his wonderful, laid-back nature. A TCHS volunteer named Kevin took Cano for a playdate weekend to give him a break from the shelter; Cano charmed him so much that he ended up staying with Kevin a little longer.  But his permanent home was still around the corner – and the timing of the adoption was even serendipitous! Kevin subbed in on a volunteer dog walking shift one night, bringing Cano along with him, and the pup caught the eyes of some customers who were at the shelter to look at a puppy. They decided the senior Great Dane was more their speed and ended up adopting him! Cano now has a home with a huge window he loves to look out, and he’s a hit at the neighborhood campfires. Our dear friend Kevin arranged with Cano’s adopters for him to stop by the shelter. The visit was supposed to be a surprise, so only one staff member knew Cano was coming; she told the rest of the staff to expect a “special guest.” When Cano walked through the door, everyone excitedly squealed – and no one minded that it wasn’t a celebrity. (“This is better than Oprah!” one staff said.)

We sure do love our dogs – past and present! That’s just one part of what makes us who we are. We’re in this job for the right reasons, no doubt about it!